It is straight forward to make the Autostar/Audiostar wireless with a bluetooth module and that was the last project. This updated version uses an ESP32 that has bluetooth and Wifi capability to interface with your telescope. This version also accepts the StarGPS and automatically switches to wireless after the GPS coordinates are read by the Autostar/Audiostar.

I'm calling it the Meade2WifiBT, which stands for Meade to Wifi/Bluetooth.

Nothing on the PC side or the Audiostar controller had to be modified. The wireless box sits plugs into the AUX port of the telescope and instead of plugging the line from the controller to the PC, it is plugged into the M2Wifi box.

Some of the features of the program are:

Telescope with GoTo capability, those that have a handset that allows identifying a celestral object and automatically points to it, require a knowledge of the time of day and the location. One can enter the location manually or use GPS to get an accurate and precise position. The older telescopes did not have an option of a GPS built in. Amateur astronomers found this feature very useful so there are a number of after market solutions. On of these is the StarGPS . More on that in the next section.

Another useful feature is controlling the telescope using a celestial navigation program on a computer. A number of those are available and require connecting the computer to the telescope handset. I use the free program Stellarium on my laptop, and the slightly more expensive android version on my smart phone and love it. Amateur astronomers found that having the computer a remote ability, that is wireless, is extremely convenient. As a result a device that adds wireless to the handset is also available aftermarket. This device usually costs about $200.

The handset provided by the telescopes usually has only a single accessory input. This becomes an issue when an aftermarket GPS and a wireless adapter is desired. This Meade2WifiBT device solves that problem at a fraction of the price of a commercial wireless adapter.

The Meade2WifiBT has two RJ connectors, and RJ11 and RJ9. One for the handset (RJ11) and the other for the StarGPS (RJ9). The wireless device is built in. All one needs to do is to plug in the GPS and the handset, turn on the scope and the rest is automatic. One connects the computer the same way any wireless device is connected using Wifi or Bluetooth setup in the Computer's operating system. The Wifi connection is a direct connect so a router is not necessary. This eliminates the need of an internet connect which allows one to use the scope away from home.

The StarGPS is a brilliant device. It adds GPS to your telescope! According to the website the GPS is a 65-channel GPS-NX02 receiver works with the Astro-Physics GTO, Celestron NexStar, NexStar+, StarSense, Losmandy Gemini, Meade 494/495/497/497EP Autostar, Audiostar, LX200 Classic, Autostar II, Orion Atlas/Sirius GoTo, Sky-Watcher SynScan, 10 Micron and Vixen StarBooks. I used it for my Meade LX90 telescope and it works great.
If your scope lacks GPS check it out.

The system requirement for M2BW is


Nothing else is needed but to build the M2Wifi/M2BT box below.


Here are a few images of the board and the "completed" project.
(Click on image to enlarge) 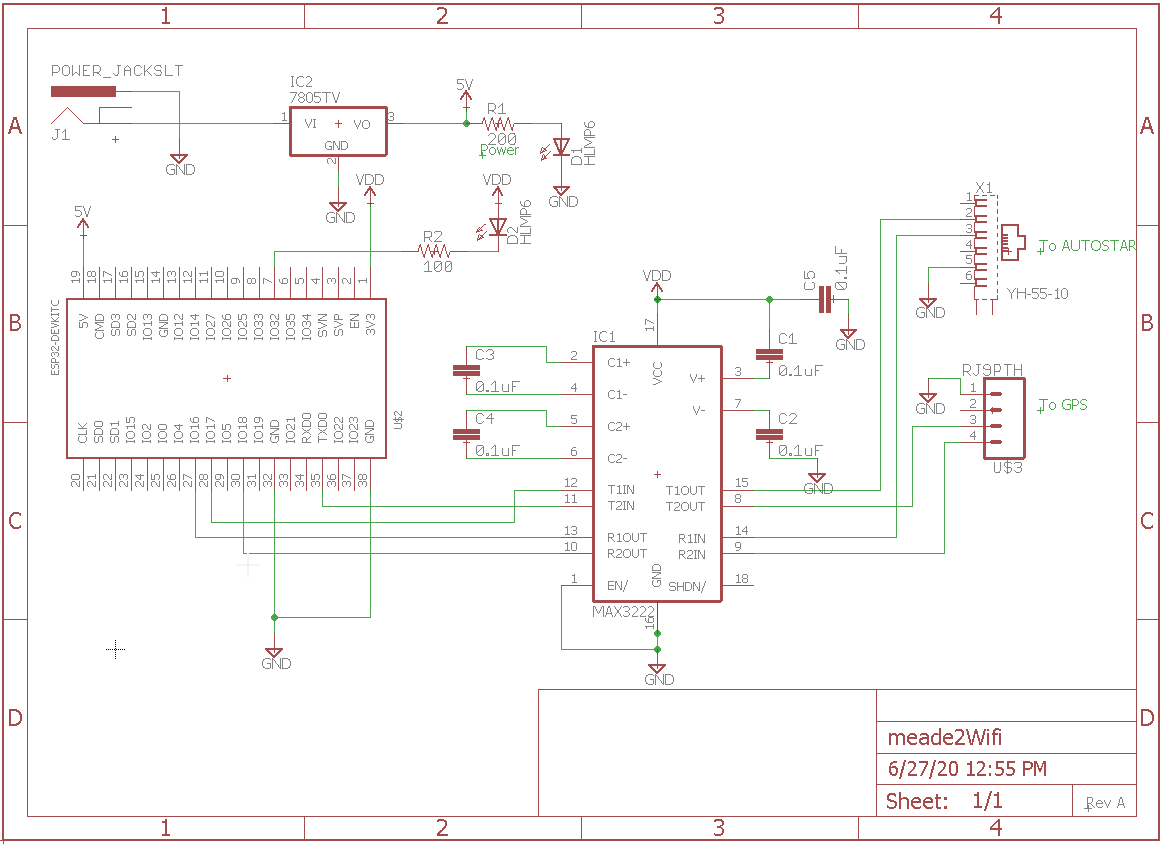 
The circuit consists of the esp32 dev module, obtainable from a number of sources including Sparkfun or Amazon (much cheaper) .

If you understand schematics you can see how simple this is. I found the trick was to figure out the RJ11 and RJ9 pinouts on the audiostar and Aux ports. The wiring can get a little tricky. When you look at the RJ connectors, reference the black wire. That will tell you the ground position. The transmit and receive are always on the other side of the plug/jack. For the Audiostar, the data to the audiostar is on the end, opposite position of the ground (black) wire. So this connects up to the transmit of COM2 of the board.

Normally GPIO16 isn't connect to any UART. After reading the Technical Reference manual on the ESP32 I noticed it that certain pins can be remapped to a specific group of pins. You'll notice there is a line of code that does that mapping. Just one line did it. This may seem simple on the surface, and coding wise it is, figuring out the line is what took time. But is a great trick and works well.

The microcode for the ESP32

Despite how easy the schematic is, the hard part is the microcode. The code has to allow the StarGPS to communicate with the Autostar and pass the GPS information. The timing has to be correct as the handshake is pretty primitive, but effective. Then it has to switch the communication to the wireless, either GPS or Wifi.

In case you have a 3D printer, I've included the stl file of the box I made for this.
(to be added later)

And here is the lid, also in stl format.
(to be added later)

Price of downloading the microcode and the schematic is free...enjoy. However, very limited support is available.

For a quick and easy Bluetooth connection, but slightly more costly, it turns out just connecting the Audiostar controller to the laptap is easy, as shown here


Despite our best intentions, there are always bugs. Here are the known ones.